Over the past few months, I've been writing a "Create Your Own Project" series as I have been developing my own project, Core-ography: "A Global Dance Storytelling Project." Well, I've definitely been creating over the past few months. And now I am finally in a place where I can start showing you the fruits of my efforts. After working hard to gain fiscal sponsorship, determining my budget, reaching out to friends and colleagues for private donations, and running a successful crowdfunding campaign, I finally made it into the studio to create my art. Enjoy this preview of my recent week interviewing, choreographing, and filming Pennsylvania Ballet Principal Dancer Lauren Fadeley speaking about how she fell out of love with ballet, quit New York City Ballet, and slowly found her way back to the beautiful art form of ballet. Enjoy!

I know it has been awhile since I've posted, but a lot has been going on. Nearly two weeks ago, I successfully ended my first public fundraising campaign for Core-ography, where we surpassed our $6,000 goal by nearly $300. This allowed me to begin working with my first Core-Artist this past week. I spent nearly 10 hours interviewing, choreographing, and filming Pennsylvania Ballet Principal Lauren Fadeley. Beyond all of this, I was named a finalist in the prestigious McCallum Theatre's 18th annual Choreography Festival. This means that I will be heading to Palm Desert, CA with two dancers to perform my pas de deux from "Distinct Perceptions" and compete against the likes of 9 other established and emerging choreographers. What an honor!

Now, I know that all of the above may seem like major milestones (which they are), but today I am here to discuss a significant achievement that we just reached together. Almost 3 1/2 years after being thrust into this freelance lifestyle and beginning this blog to share my journey and knowledge as I learned the ropes, Life of a Freelance Dancer has officially reached 100,000 views. Back when I started writing the first of these 137 posts, I never imagined that I would have an audience reading from as close as the United States to as far as Australia. Dancers and freelancers alike from the United Kingdom, Phillippines, Russia, France, Japan, India, and beyond, check in regularly to see what is happening in my life, my art, and my mind. I am so appreciative of my audience and the support that I have received from you. A GREAT BIG THANK YOU to all of my readers for helping me achieve this milestone!

With all of this said and done, I want to reward you with some great content. I've been thinking about what to write for this post for awhile, as I noticed we would hit this marker at the beginning of the month. After much thought, I determined it would be best to share with you how my life has changed since I began freelancing, and writing this blog

Let's go back to the beginning. When I moved to Philadelphia on June 17th, 2011, I had big dreams. I was taking a huge risk, leaving Pacific Northwest Ballet to join the fledgling, more contemporary Ballet X. By joining this organization, I cut my former salary down by nearly 2/3's, cut my guaranteed work weeks practically in half, and gave up all of the benefits that came with a big company contract. Why? Because like most artists do, I wanted to stretch myself as far as I possibly could. If you had told me that 4 years later I would be completely in charge of running my own career, traveling the country regularly, creating my own projects, directing organizations, and much more, I would have probably laughed in your face. Little did I know at the time that I would stretch myself in ways that I couldn't have imagined.

When I first moved to Philly, I was used to having a regular schedule. In Seattle, we had a Monday through Friday work week. We would begin class at 10:15 am and end our rehearsal days at 7 pm. I assumed things would be the same. But when I started freelancing, things changed drastically. All of a sudden I was in charge of my own technique, seeking work, negotiating contracts, self-promotion, marketing, staying in shape, and much more. I went from only having to show up in the studio to doing every aspect necessary to have a chance to show up in the studio and perform. I went from stretching in the morning, taking technique class, and rehearsing all day to never having a moment to breathe. After nearly 3 years of barely ever taking a day off, I had too much. This was one of my first major freelancing lessons. I started to burn out and displayed symptoms of severe anxiety. Today, while I still live the same lifestyle that I began four years ago, I have learned to nearly always take Sunday completely off for myself (today being an exception to write this exciting, timely blog). By giving myself Sunday, I take some pressure off myself and have a chance to relax and refresh for the upcoming week. Dancing for a company, a two-day weekend was a given unless we were performing. Today, a two-day weekend happens maybe once or twice a year.

Another part of my life that has changed drastically since crossing the country to try something new is my mobility as an artist and my perception of what encompasses a long period away from home and my partner. I have this really bad habit of getting what I ask for, but not exactly how I thought I would get it. When I left PNB, I was really interested in making travel a part of my art form. When dancing at PNB, we rarely went on tour. This was something that I had always imagined would be a part of my career. When I joined Ballet X, there was talk that the company would have a few opportunities to tour each season. I never made it long enough with the company to attend any tours outside of the performance at an APAP conference in New York where I sustained the injury for which they eventually fired me. But once I began to freelance, things changed drastically.

My first few freelancing gigs had me excited to travel, but nervous about leaving my partner for very small amounts of time. When I performed at the Guggenheim's Works & Process series, I wasn't too worried about being away from home for 3 weeks because my partner was to join me in NYC for a week in the middle. Next, I danced for the first time with Alaska Dance Theatre for 5 weeks. Again, I was lucky that my man joined me right in the middle of the gig. So, the longest we had been apart at the time was less than 14 days. I remember being so upset when I was invited to dance with Festival Ballet Providence and found out that we would be away from each other for over 3 weeks. It was the longest that we had ever not seen each other since we moved in together in 2006. Today, I have been away from home for nearly 4 months and the longest we have gone without seeing each other has been 2 months. It is hard and not my favorite part of freelancing, but we make it work for us through regular phone and skype sessions, a relaxed approach to communicating, and the advice of a counselor.

On the traveling front, I always imagined myself touring to major cities with the company I danced for headlining in this organization's productions. But the past four years have instead featured me traveling to cities large and small, near and far, all on my own. Up until this past June, in fact, I hadn't been home for longer than 7 week in 3 1/2 years. In this time, I have danced, choreographed, and taught in New York City, Anchorage, Long Island, Providence, Philadelphia, Rochester, D.C., Myrtle Beach, Los Angeles, West Virginia, Ventura, Walnut Creek, San Francisco, Fort Wayne, Lafayette, Oakland, Irvine, Little Rock, and a few more that I'm probably missing. I used to be afraid of traveling to smaller cities. I assumed that the people would be conservative in nature, the culture would be limited, and that I would run out of things to do. This is one place that freelancing has really changed my perception. Nearly each place that I have worked has shown me that, while in differing stages of development, there are amazing people and places almost everywhere in the country. I hope to expand my perception of this outside of our country in the near future!

Another area of my life that has changed greatly since I started freelancing has been my awareness of what I am capable of creating. As a dancer, you are expected to be submissive. Most dancers are always following the lead of somebody else, often dreaming of the day that they grab the wheel of their career. I guess I was lucky that I didn't have to wait for this to happen. When I was left without a company to call home, I had no choice but to take control of things, create my own opportunities, and expand my experience. Again, if you told me 4 years ago that I would direct Alaska Dance Theatre, choreograph for the National Choreographers Initiative, create my own summer intensive in Anchorage, teach at Peridance Capezio Center, write my very own popular blog, throw networking events for freelancers, or create a film project, I would have looked at you like you had 20 heads.

Many days, I just can't believe that I have experienced and made the things happen that I have. While my stress and anxiety levels have increased ten-fold since I began living the life of a freelance dancer, I wouldn't take back getting the chance to see where my mind and body can lead me. Even with all of the challenges that I have been through over these difficultly fruitful years, the opportunity to lead my own creativity and career have defined me in ways that would be impossible under the culture and structure of most dance companies. And while I miss that structure and safety net provided by working for an established organization, I will continue to value my freedom while I stay in this career-style. Thank you again for sharing this journey with me as I find my way through joy, struggle, and creativity. And CHEERS to the years of this to come! 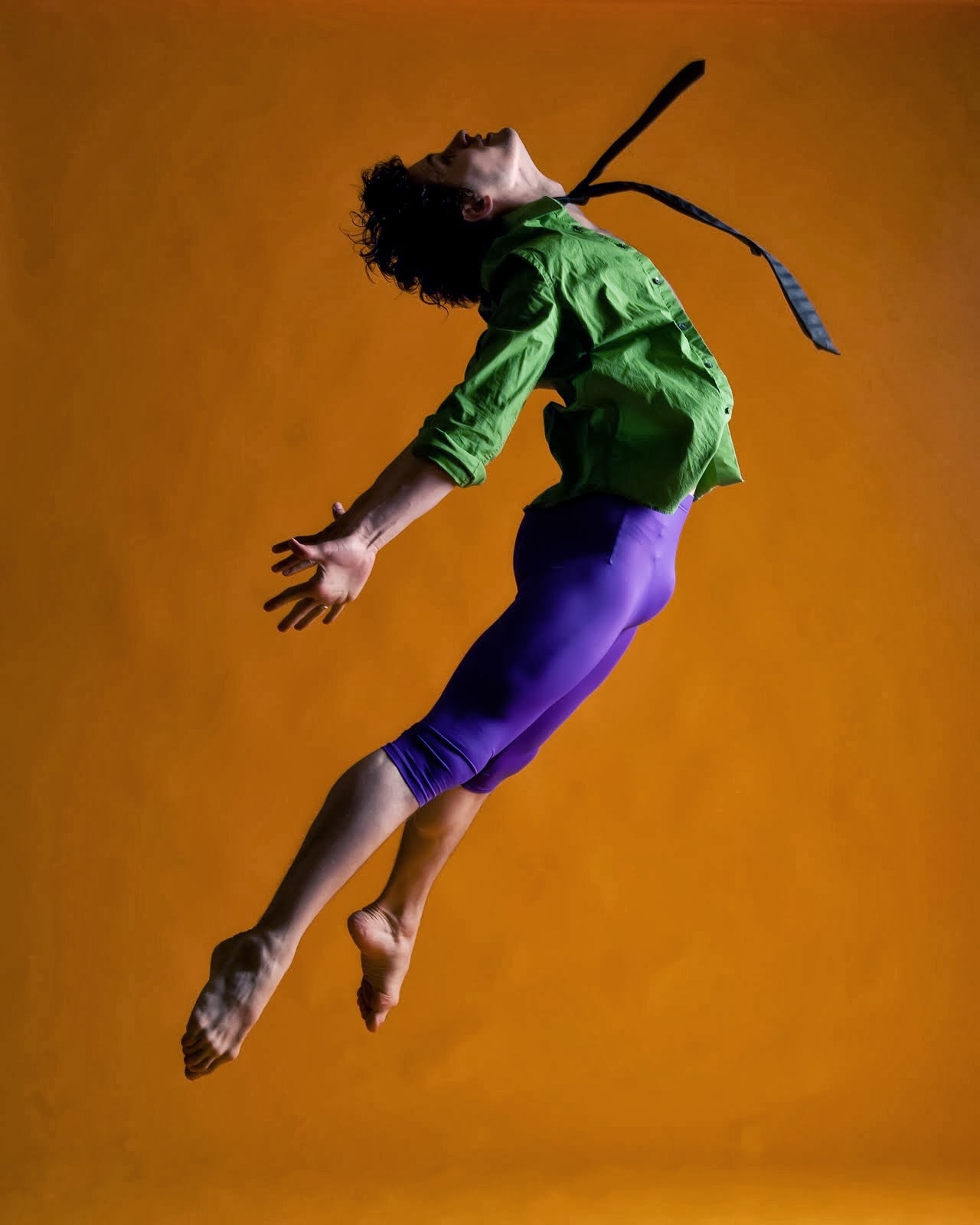 Barry Kerollis
Philadelphia, PA, United States
It is every dancers dream to land a job in one of America's top dance companies. I did that twice, staying with one company for 7 seasons. I spent years successfully pushing forward to get the opportunity to perform featured and leading roles within the company. In 2011, I chose to exit the luxurious world of a major ballet company to enter the small concert dance scene. After less than a year in this new lifestyle, unforeseen circumstances thrust me out into the world of dance on my own with no company to call home. My name is Barry Kerollis and I am a freelance dancer (http://barrykerollis.com/)